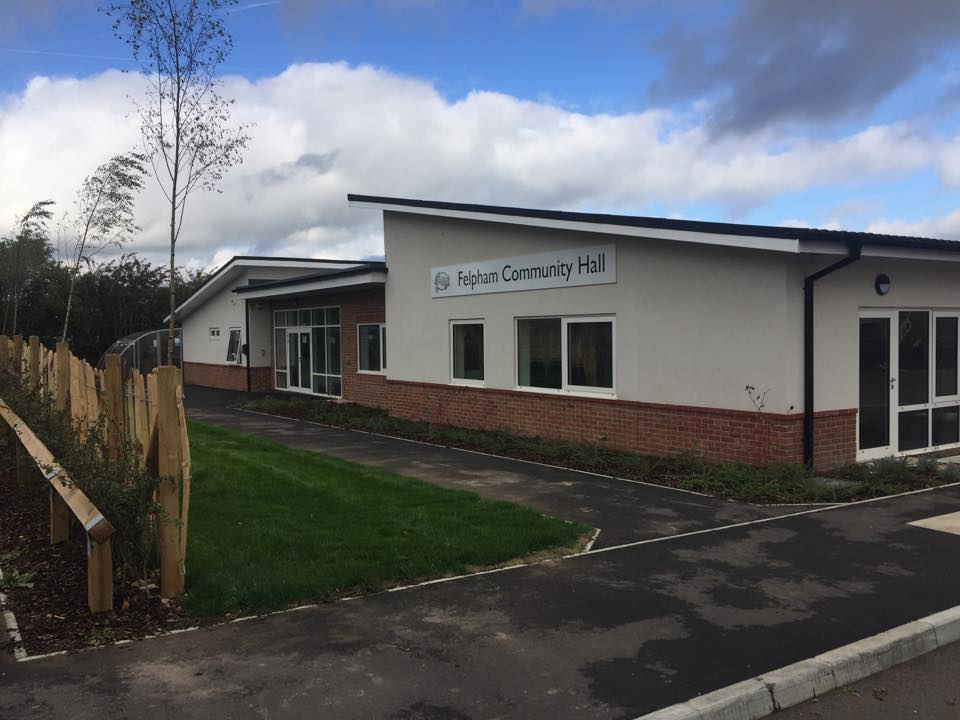 Work started on the new community centre in Felpham in Summer 2015. A ground-breaking ceremony took place as the facility began to take shape.

It is located amongst the new Blake’s Mead Estate, on Meaden Way, Felpham. The large development formerly known as site six and which has now become a series of differently named schemes.

The impressive facilities are provided by Barratt Homes and David Wilson Homes as part of their planning permission from Arun District Council for the housing. Councillors from Arun and other representatives, and Felpham Parish Council members, gathered with Barrett to mark the start of the centre’s building work. Barratt technical project manager Robert Barber said: “These new facilities have been an integral part of our plans since we first considered building new homes here in Felpham. “And this was an important milestone in ensuring the area has excellent facilities for residents of all ages. “We’re delighted our plans are now coming to fruition.

This new community centre will benefit everyone in the area - and we look forward to seeing the facilities being enjoyed by everyone.” He said providing the centre added to the pride his team felt for their work on the extensive and popular scheme in Felpham.

The Hall finally opened in September 2017 and has quickly been put to great use. Already there is a resident Pre School, regular classes ranging from Jive dancing to Yoga and from Karate to Jiggy Wrigglers and Baby Sensory sessions with a host of various fitness classes for all ages to enjoy.

Felpham Parish Council’s members are also settling in to the building, which one member previously described as worth about £1.2m.

Cllr Dave Smart, said the centre has represented a fresh start for the council. “The opening of the centre is a new episode for us. It’s a fantastic new building,” he said. “It’s an exciting time for the council and the community because it’s such a really, really nice building. “It’s a tremendous opportunity for the community of Felpham. It’s not just for use of Blake’s Mead only. It’s for all of Felpham – and we want the people of Felpham to use it as their centre.”

Arun remains responsible for the football pitch, multi-use games area and play area which surround the building. The district council also has control of the changing rooms inside the centre “ Our role is to manage what goes on inside the walls,” said Cllr Smart.

The parish council moved into the new centre from late August 2017. The relocation from its previous base in St Mary’s Centre in Grassmere Close. The council was founded in 1985 and has met at the centre since it became the previous community building to open in July, 1995

Bookings can be made with the Hall Assistant, Karen on 07927 032444 or email her on CommunityHallFelpham@gmail.com

Main Hall prices range from just £15 per hour (concessionary rate), with smaller rooms from only £7.50 per hour. Suitable for all sorts of events or occasions from corporate training to weddings and birthdays.

What's On at the Community Hall